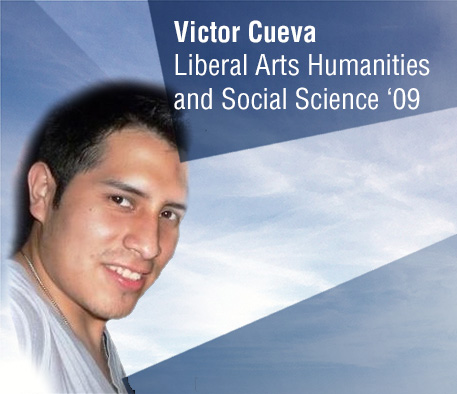 “Never give up. Perseverance is a great quality to have and SUNY Ulster helped me develop that quality.”

As a Peruvian student, Victor Cueva faced more challenges than your typical student with financing his education and immigration issues. But he persevered and SUNY Ulster gave him the foundation toward his future career in law as an attorney advocating for immigrants.

Affordability and the opportunity to play soccer with Hall of Famer George Vizvary, who coached the team then, brought Cueva to the Stone Ridge campus from his Kingston home.

SUNY Ulster exceeded his expectations and broke the myths that as a community college he wouldn’t find a sense of community spirit and that his education would simply be an extension of high school.

Here, he found a close-knit college community with the soccer team who became a second family, professors who both challenged and supported him academically, and other international students who became his friends.

“My advice to others is: ‘do not let the myths affect your college decision,’” he says.

While at SUNY Ulster, Victor was a member of the NJCAA Division III Men’s Soccer Mid-Hudson Conference 2009 team that made it to the regional finals. He led campus tours for prospective students and their parents as a Student Admission’s Ambassador, and consistently made the Dean’s List.

Although Victor was unable to get financial aid, he worked his way through college and reduced costs by earning credits while in high school and receiving some scholarship money.

His paper about immigration won best in conference at SUNY Oneonta Political Science’s 4th Annual Undergraduate Conference and he was recognized with the Spellman Achievement Award in Spring 2010 for outstanding achievement in scholarship, leadership and community service by students of African, Latino, Asian and Native American heritage.

Victor graduated from both SUNY colleges debt free and is now attending Yeshiva University’s Benjamin N. Cardozo School of Law in Manhattan as a select number of E. Nathaniel Gates scholars, where he expects to earn his juris doctor degree in May 2015.

From his own experiences, Victor wants to go on to advocate for the rights of immigrants in Ulster County and upstate, either as a full-time career or pro-bono. In his first semester of law school, he worked on handling an uncontested divorce for a battered immigrant Latino woman.

“It all started at SUNY Ulster and I will never forget that,” he says.