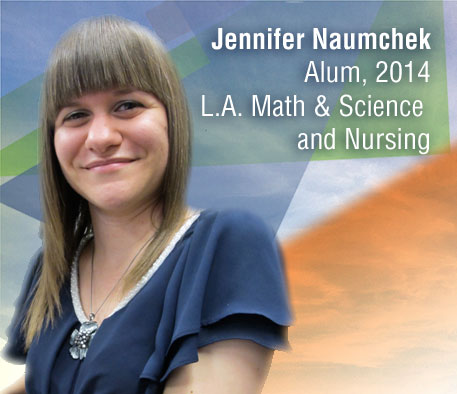 “I wanted to make a good financial choice,” she says. “But I also got more attention at SUNY Ulster than at a four-year college. It was more community-based with a one-on-one familiar touch.”  - Jennifer Naumchik, Liberal Arts, Humanities and Social Science, 2007

SUNY Ulster alumna Jennifer Naumchik has lived and taught English in Korea and Japan since graduating in 2007 but she still considers the college’s Learning Center home.

While working as a student aide in Learning Center and through talking with professors at the college, Naumchik received good advice and plenty of support that started her on her current career path to become a foreign affairs analyst.

After earning her associate’s in liberal arts, Naumchik earned her bachelor’s at SUNY Albany in Japanese and Korean Studies in 2010, following a year of studying abroad at the Kansai Gaidai University in Osaka, Japan on scholarships from the Japanese and American governments.

Originally from Ellenville, Naumchik attended SUNY Ulster tuition-free through the College Scholars’ program for graduating in the top 10 percent of her class at Ellenville High School.

“I wanted to make a good financial choice,” she says. “But I also got more attention at SUNY Ulster than at a four-year college. It was more community-based with a one-on-one familiar touch.”

She originally thought she would pursue a criminal justice degree. But advice from professors to pursue a specialty interest to open up a wider range of employment opportunities, combined with a love for languages discovered while working at the Ellenville Library, caused her to change majors.

That love of languages would take her to Korea to teach English to elementary students through the Korean government’s EPIK (The English Program in Korea) and also to work at a North Korean Refugee Center. She later taught English for the Osaka City Board of Education.

Her next stop: Starting her master’s at Fletcher School of Law and Diplomacy at Tufts University this fall. She credits Dr. Ray Raymond, SUNY Ulster’s Associate Professor of Government and History, for helping her decide on a graduate school and writing recommendations for her.

And while she’s been around the world when she’s home on breaks, Naumchik can be found at SUNY Ulster’s Learning Center where it all started. “They are my family,” she says.