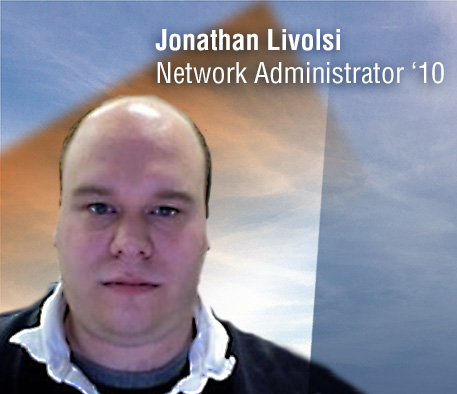 “None of the things I have learned in life have had the same impact on my future as SUNY Ulster has.”

The education and training 2010 graduate Jonathan Livolsi got through SUNY Ulster’s Cisco Networking Academy program has had a tremendous impact on his life.

The hands-on experience and detailed instruction he gained at SUNY Ulster helped him get accepted into NYU-Poly to pursue his bachelor’s degree. After transferring, he found his two years of education at SUNY Ulster put him ahead of classmates during instructions and helped him successfully stop hacking attacks during a multi-college competition (and even beat out an Ivy League team).

“Not many schools have the Cisco Networking Academy program and of those that do SUNY Ulster manages to teach more than even some four-year schools can cover,” he says. “The Cisco Certified Networking Associate (CCNA) was one of the hardest exams I have taken to this day but worth the effort. It has opened more doors to potential jobs than anything else I could have done.”

While completing his bachelor’s at NYU-Poly and pursuing many job opportunity leads, Livolsi has started a network security company with his father in NYS. He is now using his SUNY Ulster know-how to file for a patent on a network security product.

“Nearly everything I have been able to accomplish since getting my A.A.S degree in Network Administration with a Cisco concentration has been a direct result of what I learned at Ulster,” he says.