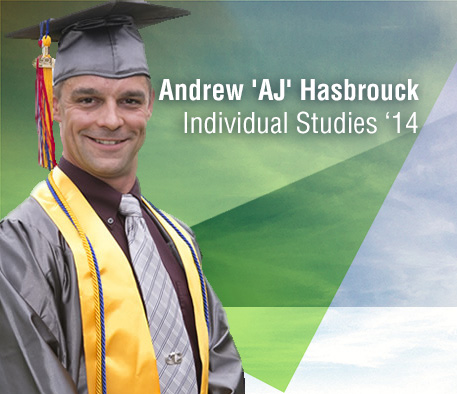 “As a veteran and single parent, it wasn’t easy studying full time. With the support I received at SUNY Ulster, I’m on my way to pursuing a career in medicine.”

When Andrew “AJ” Hasbrouck was an All-American athlete at New Paltz High School in football, swimming and baseball, he envisioned attending a larger SUNY college on a sports scholarship.

But poor grades and lack of serious interest in academics led him to enlist in the U.S. Army in 2003, where he went on to a stellar eight-year career as a Staff Sergeant, serving with the 172nd Infantry Brigade in Iraq from 2008-09 and holding a variety of other positions in Europe and as a college recruiter in Oregon.

During his military career, he developed an interest in medicine and received training in advanced trauma. Returning home, he enrolled at SUNY Ulster, where with academic support, he went from struggling with basic math to excelling in biology, graduating with high honors, earning a 3.78 overall GPA and being selected for Phi Theta Kappa Honor Society.

“AJ (Andrew) has been one the best students I have ever seen here,” said his advisor Moni Espinasa. “He is intellectually and academically unsurpassed, and has a vivacious and animated personality that makes him hysterically funny and fun to be around. He went out of his way to hold student-led study sessions during general biology and pushed everyone, like an Army Staff Sergeant, to do their best.”

Hasbrouck, 29, credits the supportive environment at SUNY Ulster in helping him earn his degree in Individual Studies, while raising a 4- and 5-year-old on his own and also training for an Ironman. He plans to transfer, after taking a semester off, to SUNY Albany to study molecular biology and bio chemistry and explore a future in medicine.

He’s now a firm believer in the value of community colleges. After giving up a career in the military to pursue education, which he previously failed at, receiving a degree and setting the right example for his children on the importance of higher education is the “biggest thing to me,” Hasbrouck says.