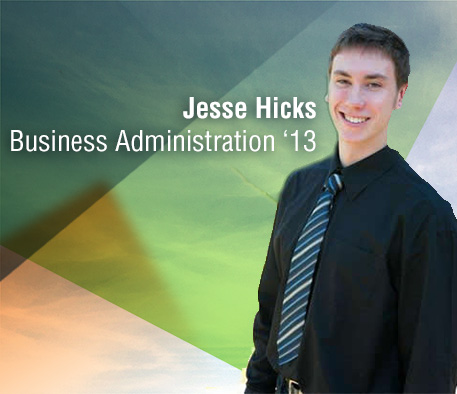 “I am a big believer in SUNY Ulster’s tagline – Start here, Go Far. Basically, you get out of your college experience, what you put into it. SUNY Ulster is affordable and accessible. It’s a great place for students to go to show themselves and excel.”

From enrolling early as a Kingston High School senior in the Collegian Program, Jesse has gone on to make a difference at SUNY Ulster through his leadership as president of the Student Government Organization (SGO) and involvement with the Business Club and other happenings on campus.

In his first term as president, Jesse has been active in getting more students involved and having their voices heard. Jesse’s idea of having a “What We Want” board outside the College Lounge has generated diverse ideas from students on how to make their college experience even better and has sparked ideas for new clubs, menu items, campus events and even a ping pong table in the cafeteria.

Since taking the SGO helm in fall 2012, Jesse has been working to get a School Senate started, securing better space where clubs can meet, and getting more participation in fundraisers and involvement from other clubs with SUNY Ulster’s “Start Here, Go Far Boutique.”

In between his business studies and leading on campus, Jesse owns his own small business, “A Day Away Kayak Rental” on the Rondout Creek in Kingston. In its first year of operation, the business grew from having three kayaks available to rent to 13. For his pursuits, Jesse was recognized with the SUNY Ulster President’s Student Entrepreneur Award in 2012 and the Chancellor’s Award for Excellence in 2013.

His early start at the college has put him on the fast track for his future plans to earn a Business Administration degree in 2013 and transfer to SUNY New Paltz, where this serial entrepreneur will, no doubt, be successful at whatever business he chooses to pursue.