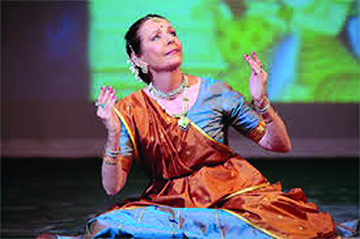 SUNY Ulster’s spring Visiting Artist, Janaki Patrik is Founder and Artistic Director of the New York City-based classical Indian dance company, the Kathak Ensemble & Friends. On the Vernal Equinox 2015, the Kathak Ensemble welcomes the return of spring in a program with friends from the Stone Ridge - Rosendale - New Paltz - Kingston community. Dancers in the Hudson Valley's popular Vanaver Caravan Youth Company, under the direction of Bill and Livia Vanaver, join the Kathak Ensemble in a performance at SUNY Ulster on March 20, 2015, at 7:00 pm in the Quimby Theater on the Stone Ridge campus.

The Northern Indian classical Kathak and folk dance performance, Vasant Leela Spring Revels, celebrating the first day of Spring 2015, will be featured. This dance journey lingers in a forest near the Taj Mahal - where Krishna and his village friends join in the great circle Dance of Life. Continuing their travels from Mughal Lucknow to elegant Viennese courts, the Kathak Ensemble dances to the Allegro of Mozart’s Jupiter Symphony.

The Vanaver Caravan Youth Company joins the Kathak dancers as they continue on to Rajasthan and create a joyous clamor of jingling bells and clicking sticks in the folk Dandiya Raas. The journey ends on a Bollywood film set, with Krishna still playing his tricks and teasing the dancers in a popular song from the movie Dev Das.

Patrik has been trained in Kathak classical North Indian dance, Hindustani vocal and tabla drumming at the Kathak Kendra, New Delhi, by several of North India’s greatest artists. She also is trained in music and dance idioms of her native United States and studied classical Western flute, as well as ballet and modern dance.

She was awarded a Senior Research Fellowship from the Fulbright Foundation in 1988/89 to study the poetry of the Kathak dance repertoire, and an American Institute of Indian Studies Language Fellowship to study Hindi in India in 1994. Janaki has performed both classical Kathak and her own choreography throughout the United States, Canada, and India.

Each is held together tightly by music. But the impetus to find the melodies and moves sprang from three different sources. From the need to create a short dance for a quickie costume change, to a fascination with flute-playing Krishna’s joyful dance on the hoods of a giant water serpent, Janaki’s description of her journey from idea to dance includes images and anecdotes.

Classical Indian Kathak Dance Celebrates the Return of Spring on March 20, 2015
Kathak Ensemble will be Joined by the Vanaver Caravan Youth Company in Finale