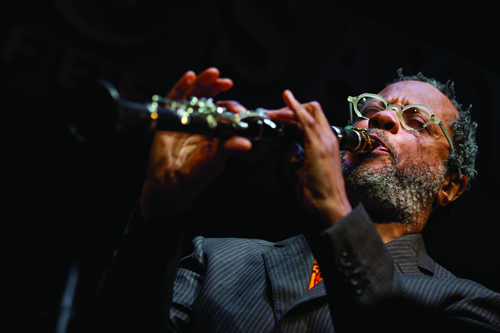 New York-born Don Byron is a singular voice in an astounding range of musical contexts, exploring widely divergent traditions. As clarinetist, saxophonist, composer and arranger, he redefines every genre of music he plays, be it classical, salsa, hip-hop, funk, klezmer, rhythm and blues, gospel, or any jazz style from swing and bop to cutting-edge downtown improvisation, documented on more than a dozen of recordings as bandleader, including the Grammy-nominated and Jazz Times Record of the Year 2004, Ivey-Divey.

For the past two decades, Byron has been consistently voted best clarinetist by leading international music magazines. He is a 2012 Doris Duke Performing Artist, a recipient of Guggenheim and U.S. Artists Fellowships.

In 2009, he was awarded the Rome Prize and was a finalist for the Pulitzer Prize for Composition. Also a gifted teacher, he has led residencies at many universities, including Harvard and Columbia, and was a visiting Professor at MIT and at SUNY Albany, teaching theory, saxophone, improvisation and composition.

His residency included three Master Classes and this concert.