The Honorable Richard A. Gerentine 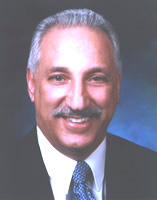 has served his community through a variety of elected, leadership positions that have entailed a broad spectrum of fiscal and management responsibilities. His thorough knowledge of federal, state, and municipal regulatory and policy issues coupled with his commitment to problem-solving and communication have enabled him to successfully foster relationships and build coalitions with individuals from a diverse constituency. While a member of town government, he sought to lower taxes through innovative budget reductions. As the chairman of the Ulster County Ways and Means Committee, and later as Legislature Chairman overseeing a 300 million dollar budget, Richard brings focus and energy to all that he undertakes.

Richard has held positions in government since 1984 beginning as Town Councilman of Marlborough until 1987, where he created and was responsible for oversight of a 23 million dollar budget. In 1988, he was elected as one of the youngest town supervisors in the Hudson Valley for the Town of Marlborough. He was elected to a second term and served until 1991. He then began his service as an Ulster County Legislator representing District 9. He has been re-elected to eight consecutive terms.  He was elected Chairman of the Legislature by his colleagues and served for two and half years. His other legislature committee positions include Majority Leader, member of the Union Negotiations Committee, Chairman of the General Services Committee, member of the Human Services Committee and Chairman of the Ulster County Records Advisory Board where he was responsible for overseeing the establishment of a record management program under the jurisdiction of the Ulster County Clerk.

In addition to his years of dedicated work in government, Richard’s commitment to the needs of the community extends to his professional accomplishments as well. As General Partner of Marlborough Associates, LP, Richard began the development of senior citizen housing complexes. His first project, a 44-unit complex became known as Jenny’s Garden I, followed by the addition of a second 22-unit complex, Jenny’s Garden II in Marlborough. He later developed a 51-unit complex, Golden View Housing for the town of Highland’s senior community. According to the Rural Ulster Preservation Company (RUPCO) that provides property management for the Jenny Garden complexes, Richard’s developments offer much needed affordable senior housing, both attractive and comfortable, designed for community members whose income is 60% or below the Area Median Income (AMI).

Richard finds time to participate in community activities as a member of the Knights of Columbus, UNICO, St. Rocco’s Society and as a past coach for Marlborough Youth Baseball and Basketball. Also a volunteer position, Richard has served as a Commissioner of the New York State Bridge Authority since 2006. He majored in Business Administration at SUNY Ulster beginning in 1972, and received a Bachelor of Science degree from Marist College in 1975.

A resident of Ulster County, Richard Gerentine continues to have a distinguished career in private business and community involvement. In his position as Ulster County Chairman, he presided over a solemn Legislative Session held on September 12, 2003 in remembrance of the attacks of September 11, 2001. His remarks during that meeting reveal aspects of Richard’s character and the level of his commitment to his community.  “The passage of time will not erase the pain and devastation which were felt by the citizens of our beloved country. Today, we thank God for the unity in our country and for the courage and commitment of our leaders…..I assure Ulster County residents that its government is committed to their safety and protection, and all measures possible are being taken towards this goal".

Ulster County Community College is proud to induct Richard A. Gerentine into the Alumni Hall of Fame.