“Joan Crawford is a proactive, accomplished, and res 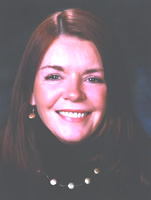 ults-oriented human services executive with a proven record of leadership, innovation, and vision. For over ten years she has brought passion and commitment to a variety of leadership roles.  She has experience formulating human service policies on both macro and micro levels and has the capacity to address changing priorities within and outside of the work setting”. In that quote from her written nomination of Joan, Linda Farina, SUNY Ulster Coordinator of Field Work and College Counselor, captures just a few of the personal attributes and professional qualities that identify Joan as a Distinguished Alumna .

Joan is Vice President of Family Services, Inc. in Poughkeepsie, where she recruits, trains, and oversees more than 150 staff members who are engaged in providing a full range of human services that address employment, mental health, and emotional issues. Her own background as a therapist and counselor has provided a solid foundation for her current oversight of a wide variety of programs and specialized treatment teams. She is responsible for the management of the Crime Victims Assistance Program, Forensic Services, Battered Women’s Services, Youth Programs, Substance Abuse Prevention Programs, and Family Education services.

Throughout her career, Joan has been a champion for those from the disenfranchised in the community. She began her life’s work as a Substance Abuse Counselor in 1995 at The Turning Point, a residential substance abuse treatment center, and moved on to become a therapist in the Step One program, an outpatient setting that included providing systems advocacy and case management in addition to individual and group therapy. In 1999, Joan took a position with Family Services, Inc. in Poughkeepsie, as Director of Counseling Services. Her clinical and administrative responsibilities included management of programs that provide essential community services such as the Comprehensive Crime Victims Assistance Program, the Rape Crisis Center, the Sexual Assault Forensic Examiners Project, Elder Support Program, Early Intervention Program, Domestic Abuse Awareness, and Workforce Development for Teens.

She was promoted to her current position in 2003 where, in addition to management of professional staff, her duties encompass program planning and development, fiscal accountability, budget development, quality improvement and proposal writing for funding sources. She is responsible for program evaluations, systems development and for ensuring compliance with regulatory entities.  Since 2000, Joan has also provided consulting services in areas of training and curricula development for professional groups that include the NYS Governor’s Office of Employment Relations, the NYS Coalition Against Domestic Violence, and Vassar College.

Joan has been recognized with the NYS Social Worker of the Year Award for 2007 by the National Association of Social Workers; the Ulster County Legislature’s Pride of Ulster County Award in 2007; Excellence in Social Work, 1994, and the Hudson Valley Leadership Scholarship in 1993 and 1994 at Marist College. She has held several positions related to her work including President of the NYS Crime Victims Advisory Board; Chair of the Dutchess County Children’s Services Council, National Delegate Assembly Representative for the Hudson Valley Division of NASW, and Fiscal Agent, Ulster County Substance Abuse Prevention Board.

Joan’s extensive experience enables her to interface effectively with state, county, and local stakeholders while at the same time creating a reputation as a community leader. She is a shining example of humanity in action and significant accomplishment SUNY Ulster takes great pride in welcoming Joan to the Hall of Fame gallery as a Distinguished Alumna.