(This is page 2 of the Memories of Ron Herrick from an audio tape recorded by Ron Herrick in 1983 and given to the Macdonald DeWitt Library Local History Collection.)

Jack and the Beanstalk 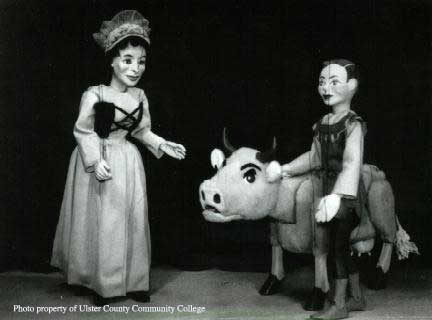 He didn't want to take her to town and sell her, but mother insisted and so he finally took off and left with Buttercup. On the way, he met a wizard and the wizard carried a birdcage in his hand and, in order to prove to Jack that he was magic and a wizard, he made the bird disappear right in front of the audience. No bird in the bird cage when he said the magic words. So that convinced Jack and Jack took the beans.

Then he took them back and gave them to his mother and she, in disgust, threw them down on the ground and scolded him. After she had left the beanstalk started to grow and it was made out of soft rope and felt leaves and grew and grew and grew. That scene ended with Jack climbing up that beanstalk.

We wondered what to do for the giant and we finally made him a rod puppet with a head about ¾ the size of an ordinary person's head. He had black whiskers. He was a formidable character and he was always shouting. 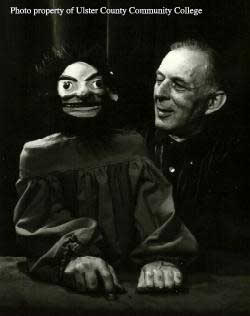 He shouted at his wife and she brought him in his dinner and he gobbled up his dinner and he smacked and was as disgusting as he could be. Then when he had eaten his dinner, he put his head down on the table which was in front of him and he was worked from underneath the bridge through what looked like the back of a chair and had a table in front of him. First, before he went to sleep, he had called for his bag of gold and he counted his gold and finally went to sleep and then Jack sneaked in and stole the bag of gold and took it out to the top of the beanstalk. 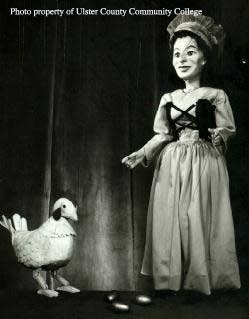 Later on the giant woke and called for his hen that laid the golden eggs and we had a little hen that came in, hopped up on the table and upon his command laid three golden eggs. And that always went over really big.
But he again went to sleep and Jack sneaked in and took the hen out to the top of the beanstalk again. 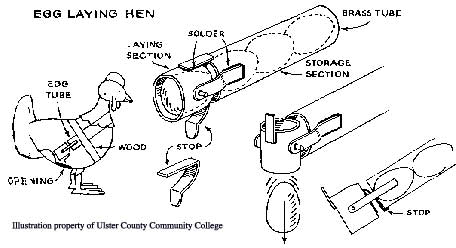 Then the giant woke a third time and called for his harp. And we had wings on the harp and on the post of the harp we had carved a little head and the harp came in and played for him and played him to sleep. And Jack came in and stole the harp but as he went off into the wings on the sound tape he slammed the door but of course there was no door there. 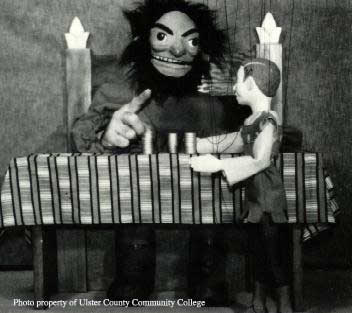 Slamming the door awakened the giant. And he went roaring off after Jack for stealing his stuff. Then we went back to the final scene and here was the bean stalk shaking like crazy and Jack's mother looking up at it and telling him to hurry because that giant was catching up with him. In the meantime down came the bag of gold, down came the hen, down came the harp. And tension mounted as the beanstalk shook and shook crazily and Jack finally came down and dashed off stage and got a hatchet and chopped the beanstalk down and the giant came to a terrible end.

That was one of our very best shows. It kept the audience on tenterhooks all the time."